Well being such a significant day in the beer world i thought I’d kick of the Craft Beerscapade blog today. I’ve polished off just under 400 craft beers in the 8 months. I’ve been rabbiting-on to my mates about the range of beers I’ve tried over that time, with some turning their noses up to beers with flavour in favour of multinational mainstream beers, and others were willing to dabble in craft. Some even asked why i don’t write (blog) about the beers i drink, so I tossed around the idea over a few hundred beers and decided to have a crack.

Now I’m willing to try all beers with preference to the hoppy IPA’s, although in this cooler season the darker ales have been hitting the spot.

So you may think on this special beer day and looking at the photo of my current supply, what did i choose? It was the Sail & Anchor / Karl Strauss The Bloke Red Ale. Reason behind this selection was that it seems at my local BWS it mustn’t be selling to well and the price has been slowly dropping. I’d tried the Bloke earlier in the year when it was first released and wasn’t planning on revisiting it. However, now at $3.50 a bottle i couldn’t shy away from it and grabbed a bottle or three. Glad i did now, as with a little age i think it’s gained some character. This Red Ale poured quite well with a medium head, a malty citrus aroma, medium hoppy taste and quite easy to drink.

Well worth revisiting, which now makes me wonder should i revisit some of the 400 that I’ve already tried? 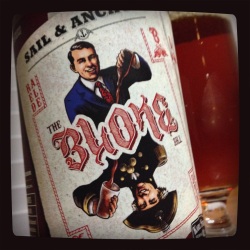 What’s in the Kegerator

See what you think, hope you enjoy!