Posted by craftbeerscapade on 27/02/2015
Posted in: Breweries. Leave a comment

Each year my family’s yearly Christmas getaway takes us south for a few weeks to just over the Queensland New South Wales boarder, to the Tweed Coast. A great area with some great townships and watering holes! Generally a day trip here and there takes us to one of the more touristy towns in the vicinity, and Byron Bay gets a visit from us most years. Even though I’d normally stay away from this alternative holiday mecca during this period, this time a strategically planned trip would see some benefits – in the way of a few brewery visits to the two breweries that Byron harbours.

The main road from the highway into Bryon normally is bumper to bumper during this time, so when you come to the commercial estate on the left it’s well worth dropping into Stone & Woods original brewery. I’d been drinking S&W beer most of the holidays as it seemed most of the pubs and clubs from the Tweed to Byron run their beers on tap (So I noticed – research of course!). Now with its larger brewery situated just up the road at Murwillumbah, the original brewery now brews their smaller batched beers.

As I was dropped off at the gates of the brewery I was greeted by one of their friendly staff before I even made it to the front door. The young lass (Bronte) asked if I was here for the brewery tour which I confirmed and was then shown through to the newly constructed bar area and offered a sample of their brew while I waited as there was supposed to be another ten people joining the tour. This new bar area will prove popular for the visitors and locals alike with the capacity to run 8 taps, sporting the Beastman Malt Water Hops & Yeast mural hanging from the rafters over the bar (Oh check the toilet/urinals out – being a plumber I was most impressed!).

Some ten minutes or so had passed and there was no sign of the other ten arriving, my glass was empty! I was asked if I could wait a few more minutes and offered another sample, I was feeling like beer royalty (I didn’t mention that I blog about beer stuff and I’m by far a noticeable person in the beer scene, just like drinking the stuff!), and  could play the waiting game all afternoon while the beer kept flowing, but I did want to make it to the Byron Bay Brewery. 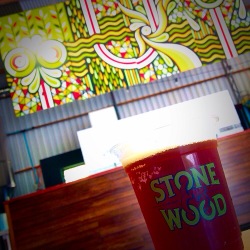 After finishing the second sample another fella, travelling down the coast back to Melbourne, came through the door and we got this tour on the road. While not a big brewery, space wise, it’s amazing that they could pump out as much as they did before bringing the Murwillumbah site online. I’m not going to go through the whole brewery tour, don’t want to spoil the fun, but in short they tip in malt, water, hops and yeast in one end and beer comes out the other. Once the tour was over we had a few more samples over a Q&A session and purchased some souvenirs before heading on my way. 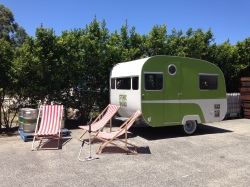 Bonnie getting some R&R

A lot of has been written about this brewery – a Cinderella story so to speak, just 7 years old, it’s probably one of the leading ‘Craft’ breweries in Australia, it picked up No2 position with its Pacific Ale in the Local Tap Houses Hottest 100 Craft Beers and that can be attributed to the guys knowing their business and looking after their community and clientele, and it shows in their staff.

About 4km towards town, nestled just far enough away from the town centre, was the Byron Bay Brewing Co, the destination for my next stop. The brewery is housed in part of the “Old Piggery” a building which funnily enough was formerly an old piggery in Byron from 1898. A major renovation in 2008 was done to accommodate the brewery which it shares with the Pighouse Flicks Cinema, the Piggery Band Room, beer garden and more importantly the Brewery Surf Bar so you can try out the brews on tap.

Walking through the front doors, passing by some vintage surf boards and up the steps is the unmistakable brew room, all in a safely enclosed area with large unobstructed glass windows showing off the shiny stainless and copper vessels inside. This place does see some traffic with regular gigs at the band room and beer garden so keeping patrons away from the bells and whistles is probably a good idea. Further up the hallway leads into the spacious Brewery Surf Bar with the buildings centre wall providing a protected home for the 7 fermentation tanks.

While I didn’t plan on a brewery tour, I certainly planned on sampling the range of beer on tap. Of course their flagship beer the Byron Bay Pale Lager (draught version) and five other core draught beers are available and occasionally the odd seasonal brew. At the time of my visit “Kingtide IPA” was running and it added a 7th beer to the generous sized surfboard shaped tasting paddle. All good beers!

If you’re not keen on the crowded mecca of inner city Byron, this place is just far enough away not to be affected by the hoards. Lunching out in the beer garden with a plethora of beer styles isn’t a bad way to spend a few hours.

Anyhow the day was nearing an end and it was time to return to camp, but not without checking out the bottle shops and their availability of craft beers. Great Northern Hotel’s bottle shop seems to be the place, with a few fridges chock a block with local and international craft.

Plan your day right and it’ll be a great family trip, just 1h50min from Brisbane and plenty for the whole family to do – sun, surf, shops and beers!